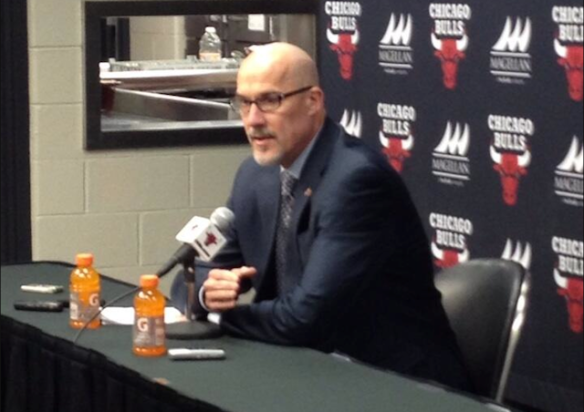 You know how I became a Bulls fan? Because I was born at the right time.

My formative years were spent watching Michael Jordan, Scottie Pippen and Phil Jackson. From the time I was 10 years old until I was 17 the Chicago Bulls won six NBA titles. At that point, it was somewhat hard not to become hooked. What I wasn’t nearly as into at the time were the Blackhawks. Most of the games weren’t on television, and many that were coincided with Bulls games.

The Blackhawks were good, but they weren’t competing with Michael Jordan. Nobody was.

A lot has changed since then, and more could change in the coming years.

A new era of Chicago Bulls basketball began late Monday night when news broke that Luol Deng had been traded to the Cleveland Cavaliers for the former basketball player known as “Andrew Bynum’s contract” and three draft picks.

My initial reaction to the trade was shock, simply because I didn’t think the Bulls had it in them. While the prospect of a rebuild seemed logical the moment Derrick Rose went down with yet another knee injury, logic has never seemed to be the Bulls’ strong suit. But while Bulls fans are happy to see the organization starting over, there is nothing guaranteed with a rebuild, and there’s a lot more on the line here than some bad basketball games.

It’s easy to scream “rebuild, rebuild!” from the comforts of the internet or the office or with family during the holidays, but rebuilds themselves are difficult. And they last a long time.

Keep in mind that there are still 50 Bulls games left this season to get through, and possibly a few more seasons after that before the Bulls are competing for anything yet again. I remember how things were after the dynasty of the 90s was broken up, and all the lean years endured before the Bulls got both Ben Gordon and Luol Deng one draft night and a new organization began to rise from the ashes.

But there’s the potential that this rebuild won’t be felt just on the court and in the Eastern Conference standings.

That 12-year old kid who once grew up with the Bulls in the 90s is now growing up with Patrick Kane, Jonathan Toews and the Chicago Blackhawks. That’s the team in this city that is winning championships right now, and because of it, the Hawks are converting a lot of young, impressionable minds into hockey fans.

Now imagine those young minds are watching the Blackhawks win titles while the Bulls are losing 50 to 60 games a season the next few years. Do you see why this could be dangerous?

While Chicagoans my age and younger remember the Bulls as a key part of the Chicago sports world, it really wasn’t all that long ago when the Bulls were playing something that was considered a niche sport. Let’s not forget, before Jordan came around, NBA Finals games were shown on tape delay.

Hockey used to be the king of winter in this city until Michael Jordan came along and changed that. It can just as easily change again.

So while a rebuild may be just what the Bulls need, there’s no guarantee that anybody will still be around to see the finished product once completed.