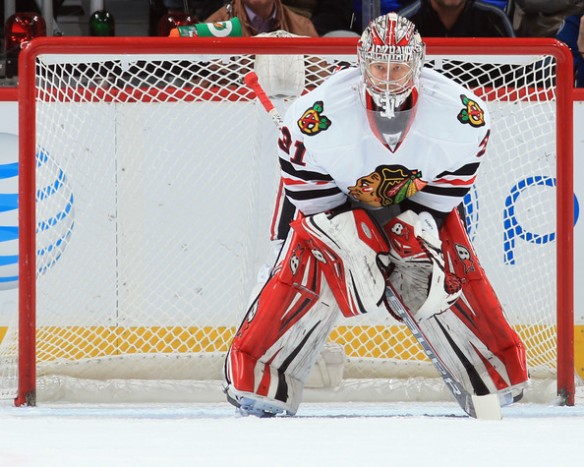 The Blackhawks need to make a change in net, but it has nothing to do with Corey Crawford.

Antti Raanta had a bad night in the net on Tuesday. It wasn’t all his fault as the Blackhawks defense made its fair share of mistakes in front of him, but sometimes you need your goalie to bail you out. Raanta hasn’t been doing much of that in his time with the Blackhawks this season.

During the stretch Raanta was a starter while Corey Crawford was injured, he played well enough. He started 10 games and the Hawks went 7-1-2 in that span. Raanta wasn’t leading the way, though, allowing at least two goals in seven of those games, and five goals in two of them. He just had the good fortune of being in goal before the Blackhawks offense decided to go on a little vacation.

His numbers on the season are wholly respectable, as the Hawks are 12-2-3 in games he starts, and he has a GAA of 2.40, stopping 90.4% of the shots he’s faced. But things have changed since Crawford has returned. Now that Raanta is only seeing spot duty, he’s been subpar at best.

Since Crawford returned, Raanta has started four games. In those four games he’s allowed 11 goals (his GAA is roughly 3.17 in this stretch) and he’s saved only 86.4% of the shots he’s faced. As I already said, the play of the guys in front of him has certainly been a factor in the performance, but those are poor numbers no matter the reasons.

Yet his performance isn’t even the reason I want to send Raanta to Rockford. This isn’t just typical “he’s giving up goals, he sucks, get rid of him” goalie blaming. I just think it’s becoming obvious that Raanta plays better when he’s playing consistently, which isn’t surprising with a 24-year old goalie.

This is Raanta’s first season in the NHL, and it’s hard enough to adjust to this league on its own, let alone when you’re playing once a week or so. Meanwhile, down in Rockford, the Blackhawks have a goalie they traded for that’s used to that kind of role. Jason LaBarbera has been all right during his time with the Icehogs. His numbers aren’t great (2.40 GAA, .927 save %) but they’re actually better than the ones Raanta was putting up in Rockford.

Plus, LaBarbera is 34 and has played 182 mostly unremarkable games in the NHL as a backup. He’s not the kind of goalie that’s going to come in and push Corey Crawford for a starting job — though I’m sure some fans will say he should after one good game — but he’s not going to be terrible, either. He’s just going to be your backup goalie.

And he’ll do so while allowing Raanta to earn regular playing time in Rockford, where hopefully he’ll become a better goalie.

It’s not like this isn’t a plan the Blackhawks haven’t taken before, after all. Corey Crawford came up for spot appearances, playing in eight games in three separate seasons during a five-year span, before coming to Chicago to play a significant role. He was 25 before he finally started seeing regular playing time with the Hawks.

With Crawford signed through 2020 it’s not like there’s any need to rush Raanta. I’m not sure what kind of long-term value Raanta has to the Blackhawks with Crawford signed for so long — and for enough money that it would make it hard to trade him down the line — but whatever that value is, I don’t think watching him struggle through sparse playing time is going to increase it.