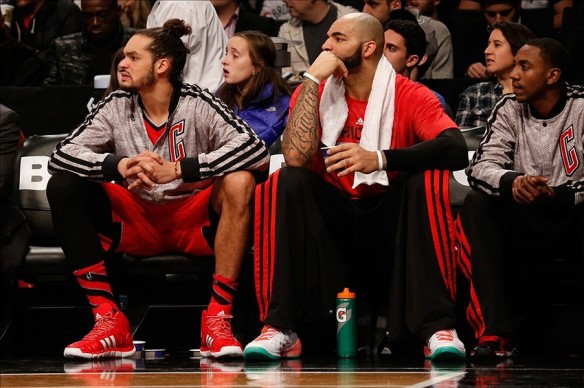 Good news for Bulls fans (basically all of you) that are counting down the days until the team amnesties Carlos Boozer and he’s off the salary cap. It appears that today may have marked the beginning of the end of Boozer’s time in Chicago.

He’s not going to be traded, barring some kind of miracle in which a general manager is dosed with LSD and loses his mind, but this is possibly the next best thing.

Throughout his career in Chicago, Boozer has found himself on the bench during the fourth quarter as Tom Thibodeau opts to go with Taj Gibson instead. Publicly, Boozer has been a good teammate about all of it, as he doesn’t complain to the media about his role late in games.

And then today happened.

“I think I should be out there but it’s (Thibs’) choice,” said Boozer, via Nick Friedell’s Twitter account. “He makes the decisions out there. I play, he coaches. He’s been doing that a lot since I’ve been here, not putting me in the fourth qtr. Sometimes we win, but more times than not we don’t.”

I have no idea whether or not Boozer’s assertion that the Bulls lose more often when he sits is true or not, nor do I care. It doesn’t matter if he’s right or wrong. All that matters here is that Boozer is speaking out about how he feels, and we all know how Thibodeau loves when players start airing their grievances through the media. Every coach does. Coaches wake up every morning hoping that one of their players says some dumb shit out loud with a microphone shoved in his face.

Obviously, this isn’t going to help Boozer get more minutes in the fourth quarter. Thibs is likely to sit him more often now. What this actually means is that Boozer knows about the possibility that he’ll be amnestied after the season just like you and I do. He also knows that by complaining about these things publicly he’s making the amnesty more likely.

Boozer wants out just like Bulls fans want him out. He wants one more contract — all while the Bulls still pay him next season anyway, mind you — and he’s doing what he can to get it.

He’s basically screaming “GIMME THAT AMNESTY” instead of “GET THAT, JO” and I couldn’t be happier about it.