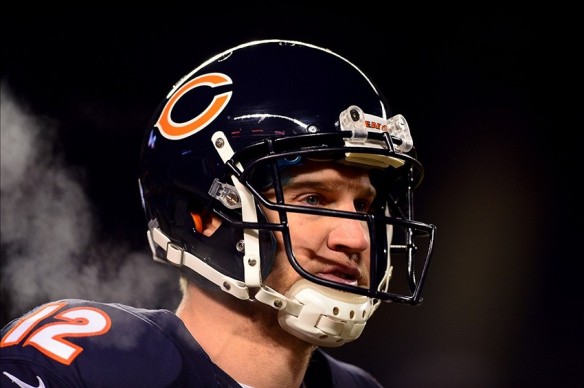 The Bears have been active re-signing their free agents lately, but one of the names we haven’t heard much about is backup quarterback extraordinaire Josh McCown. Since the end of the season McCown has expressed his desire to return to the Bears and backup Jay Cutler, but saying and doing something are very different things.

And according to Ian Rapoport of NFL.com, it’s “unlikely” that he’ll be doing it.

NFL Media Insider Ian Rapoport said Thursday on “NFL Total Access” that it “seems unlikely” that the backup quarterback will re-sign with the team on the heels of his transformative season in the Windy City.

Rapoport named the Tampa Bay Buccaneers and New York Jets as two “realistic options” for the 34-year-old McCown in free agency. He’s a good bet to earn more on the open market than Chicago’s willing to pay after Jay Cutler signed a multiyear deal with $54 million in guarantees.

Now I’m sure some of you are devastated by this news, and I get why. Since coming to the Bears Jay Cutler has started all 16 games in a season just once, in 2009, his first year with the team. So having a capable backup is rather important for the Bears. And McCown showed himself to be more than a capable backup last year, starting five games and throwing a career-high of 13 touchdowns (11 as a starter) with only one interception. Extrapolate his stats from the games he started throughout an entire 16 games and McCown would have finished the season passing for 4,937 yards, 35 touchdowns and only three picks.

Those numbers are precisely the reason some Bears fans would have rather let Cutler walk this offseason to bring McCown back as the starter. Even if he’ll turn 35 before next season starts.

And those numbers are precisely the reason why he’s not likely to be back. Yes, McCown likes Chicago and wants to return, but it’s a lot easier to say that before some other team offers you a much bigger contract and a starting job. All of which means that the Bears are likely going to need to sign another veteran backup — or bring back somebody like Jordan Palmer again — for when Cutler gets hurt next season, because Cutler is going to get hurt next season.

No matter who they sign, though, there is something else I’d like to see the Bears do this spring.

There’s no question that the biggest focus of this year’s draft has to be the defense. In fact, I wouldn’t be surprised if the Bears use every single pick they have on the defensive side of the ball. And if they do, I won’t be upset, but I’d also like to see the Bears use one of their later picks on a quarterback.

We all trust that Marc Trestman is a quarterback guru. He’s done it with too many different quarterbacks to feel otherwise. We just saw it with our own eyes with McCown last year. Unfortunately for the Bears, McCown did so in a contract year.

But what if the Bears drafted a quarterback, Trestman developed him, and he played well filling in for Cutler during the inevitable injuries to come? That would be an asset the Bears could really use, as quarterbacks are always a valued position in the NFL. So if the Bears used a late round pick on a player like Aaron Murray, AJ McCarron or a Tajh Boyd, he could be extremely valuable to them in the future.

Be it as a trade chip or the eventual successor to Cutler — hey, NFL contracts are made to be voided — down the line.

So maybe by leaving Chicago, McCown could be doing the Bears a favor. Putting them in a position where they can draft an asset for the future.