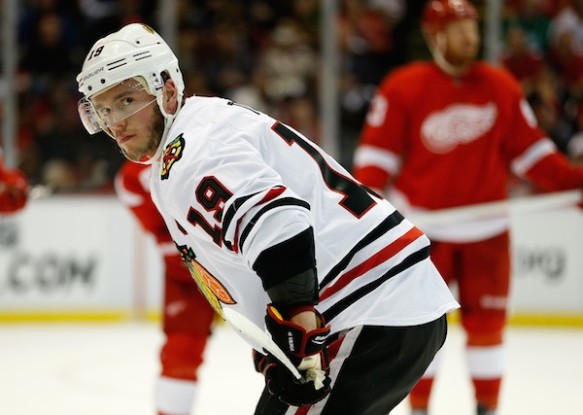 What do you say we talk about Jonathan Toews’ health for a bit?

How about instead of debating whether or not the Blackhawks should have “sent a message,” or should be tougher and meaner — a debate I’ve been sucked into far too many times for my own liking in recent days — let’s just talk about the one thing that actually matters to the Blackhawks right now.

The health of Jonathan Toews, and what it means with the playoffs quickly approaching.

There are less than two weeks left in the regular season, and Jonathan Toews was not skating with the Blackhawks during practice on Wednesday after leaving Sunday’s game with an injury. After the game Joel Quenneville said he didn’t believe Toews injury was serious, and that he’d be day-to-day.

Well, even if the injury isn’t serious, is there really a need to rush Toews back at this point?

Let’s look at the reality of the situation. The Blackhawks have six games left to play this season, and currently trail St. Louis by 10 points in the standings, and Colorado by three. They aren’t catching St. Louis. As for Colorado, it’s possible, sure, but it’s also complicated by the fact that the Avs have seven games left to play, and therefore have one more opportunity to pick up points in the standings.

Oh, and with or without Toews, the Blackhawks still don’t have Patrick Kane.

And with or without Toews, the Blackhawks have still gone 7-8-1 in 16 games since returning from the Olympics. Even with Kane on the ice they were only 4-4-1 after the break.

So whether he’s healthy enough to play or not, maybe it’s better for Toews, and therefore the team, if they just let the captain rest up a bit. The entire team is already coming off a short summer thanks to their Cup victory, and plenty of Hawks had a few weeks of Olympic hockey thrown on their plate as well. Rest isn’t exactly a bad idea, particularly as the team approaches a Western Conference playoff that is going to be an absolute grind for any team to get through.

Honestly, I do not like the Blackhawks chances this spring. Nobody who has watched them play these last few weeks and is actually sane would. That being said, their odds might improve if Toews, who is more important to this team than anybody else on the roster, was well-rested and fresh.

I’m not saying to hold him out for the rest of the regular season. I’m already worried about Patrick Kane jumping back into the fray during a playoff season. But don’t rush Toews back (and don’t let Toews rush himself back, either). Let him get some rest and relaxation and maybe put him back in the lineup for the final game or two, just to let him get his legs back under him.

UPDATE: And of course minutes after I publish this post the Hawks announce Toews is going to sit out the rest of the regular season. BEWARE MY POWERS, INTERNET. FOR NOT EVEN I KNOW THEIR LIMITS.