The New York Times released what it’s calling “a map of baseball nation” using Facebook data (probably what MLB gear babies are wearing in pictures their parents posted), and when it comes to Chicago, the map shows us what anybody who has been paying attention already knows.

The other thing the map shows is that, by and large, when you talk about the actual city of Chicago and its nearby suburbs, the Cubs and White Sox fan bases are split pretty evenly. It’s not until you zoom out on the map that you see just how the Cubs fan base dwarfs the Sox one. 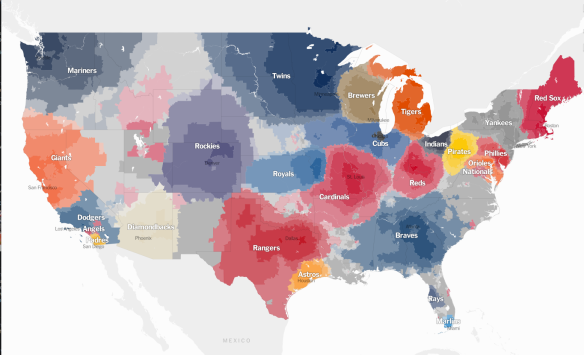 So, shocking news: the Cubs have more fans overall than the White Sox. I, for one, am glad the debate has finally been settled.

What did surprise me a bit is that the two towns I grew up in are considered White Sox towns — though barely — on the map. I feel like I’ve been surrounded by Cubs fans my entire life, but maybe that was because the majority of my family roots for the Cubs. Also, for the first time in my life, I currently live in an area dominated by Cubs fans (44% Cubs, 31% Sox, 5% Red Sox). Maybe this kid lives on my block.