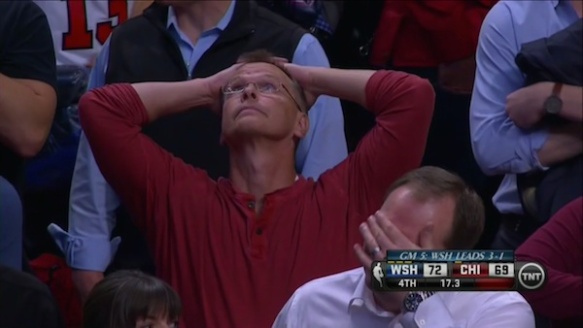 I was going to write this last night, but I felt it would be better to let my thoughts marinate overnight rather than just pulling the trigger. I was somewhat annoyed, after all, and I didn’t want to let any of that cloud my thoughts on the entire season.

But maybe I should have waited an extra day or two?

I’m still a little angry about the whole thing, to be honest. Not because the Bulls lost in the first round. Don’t get me wrong, I’m not exactly pleased by it, but it’s not like I was sitting here expecting this Bulls team to make a title run.  What I’m angry about is this entire season in general, a season that essentially amounted to a wasted year.

I was really looking forward to the Bulls this year because Derrick Rose was back. Sadly, that comeback lasted for only 10 games before he went down again, and my immediate reaction to that development was trying to take solace in the fact the Bulls could get a lottery pick out of it.  I wanted the tank. I thought the Bulls needed the tank.

As a result, I became somewhat indifferent toward the Bulls this year. I still cared, I just put some distance between us. On my priority list of things to watch, Bulls games always came second to the Blackhawks, and once baseball season started, they fell behind that too. All that said, I still really appreciated watching what Joakim Noah had become, I lived to see Taj Gibson dunk, and even watching D.J. Augustin do Nate Robinson things (which was all really just Ben Gordon stuff) was enough to keep me entertained.

Through it all, though, I wondered what the point was. Over time, they started playing better and better, and as you’ve no doubt heard a hundred times, the Bulls had the best record in the NBA from January on. Suddenly, as the regular season came to a close, the Pacers were falling apart, and the Heat were looking a little old.

The odds of the Bulls reaching the NBA Finals were slim-to-none, but maybe, just maybe if things broke the right way, they could get to the Eastern Conference Finals. At the very least it would have provided a few weeks of fun playoff basketball to watch.

And then the playoffs started, and a team that couldn’t score all season suddenly realized that trying hard just isn’t good enough in the playoffs. Everything that happened against Washington was a stark reminder of all the flaws this team always had since losing Rose again.

They had nobody they could rely on to score, and they looked tired. I wrote earlier this season about Tom Thibodeau possibly going to the Knicks, and I wondered if it would truly be that terrible of a thing to happen to the Bulls. I still don’t think it would be a huge setback for this team.

Tom Thibodeau is a great coach. He’s one of the best basketball coaches in the NBA, and he’s proven over the last two years if you give him a mediocre team, he can make it look really good. My problem with Thibodeau, though, is that while he certainly knows how to win an NBA game — and he tries to win every single damned one of them — I don’t know that he knows how to win an NBA title. And make no mistake, those are two very different things.

His stubbornness is what has helped get him where he is today, but it’s also his tragic flaw. This Bulls team just looked tired against Washington — they also looked like the team with less talent — and it’s hard not to connect the dots of Thibs working these guys so damn hard during the regular season, and them fading at the end. Now, it’s important to point out that Taj Gibson said the Bulls looked tired at the end because they kept falling behind Washington early in every game and had to comeback, sapping their energy.

And there’s Thibs’ stubbornness again. The Wizards jumped out to big leads in just about every game of this series, yet Tom did nothing to adjust. Each game he sent Carlos Boozer out there with the starting lineup, ignoring the fact that Boozer was basically helpless against the Wizards, averaging 9.6 points, 7.8 rebounds and shooting 42.6% in 24 minutes per game.

The Bulls shot 42.2% as a team in the series, with an adjusted FG% of 46.3%. They shot 33% from three. Yet, despite the fact that DJ Augustin shot 29% and Jimmy Butler 38%, did Thibs ever even consider going to that career 40% three-point shooter on his bench that the Bulls picked up late in the season? I doubt it. Jimmer wasn’t part of the rotation, and even with the season on the line and things looking bleak, Thibs wasn’t going to change anything.

None of this is to say I want the Bulls to get rid of Tom. What I would like more than anything would be for Tom Thibodeau to learn from his mistakes and become an even better coach. Plus, let’s say the Bulls did get Carmelo Anthony, Thibs might just suddenly know how to win an NBA title then.

Oh, Melo, the answer to all our prayers. You’ll fix everything!

While I remain unconvinced that adding Melo and subtracting Boozer, Hinrich and Taj (Taj will likely still have to go to make room, remember) and whoever else you’d need to clear out suddenly makes the Bulls a title contender next season, after watching that series, it’s hard to argue against going after him.

He may not be the answer, but he’s probably the best option you have at the moment. The question is whether or not this moment right here is what the Bulls should worry about, or is it five years down the line when Carmelo is in his mid-thirties and taking up a huge chunk of your cap space along with Rose.

Christ, this is all kind of depressing, isn’t it?

Well, let’s end it on a positive note. I’m actually looking forward to this summer for the Bulls. As has been the case all too often for Bulls fans in the last decade, the summer is the real season anyway.

Hell, maybe they’ll shock everybody and pull off a trade for Kevin Love.

Or maybe they’ll just try to build the core through the draft after whiffing on Carmelo.

Whatever they do, it’ll be interesting to follow and see what happens. And at the very least, Tuesday night was probably the last time we’ll ever see Carlos Boozer and Kirk Hinrich in Bulls uniforms.

There, now I feel better. Don’t you?