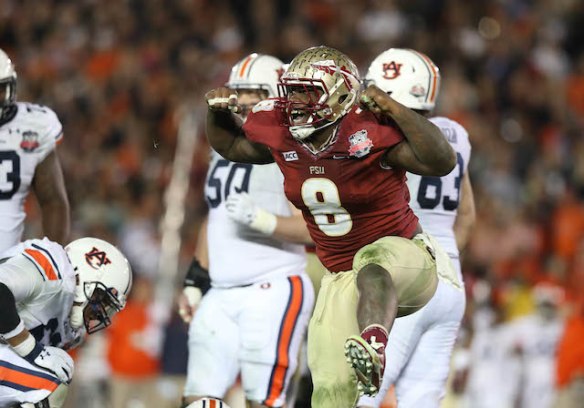 The NFL Draft continues tonight with the Bears getting the 19th pick of the second round (51st overall) and the 18th pick of the third round (82nd overall). I don’t know who the Bears are going to take with those picks, but I have an idea of what Phil Emery likes, and what the Bears could be looking at. Of course, since I have no idea who’s going to be available in the third round, I’m going to focus on that 51st pick.

With the Bears picking in the middle of the second round and with the team having addressed one of its needs at cornerback on Thursday night, I have a decent idea of who could be available. So, who should they go after? Plenty of guys, but here are a few I think could be on Phil Emery’s board.

If the Bears look to address the safety position, there should be quite a few still available, but I’m not sure how many the Bears would need to draft at that position in the second round. Regardless, let’s take a look.

Terrence Brooks, Florida State – Brooks could be somebody that Phil Emery likes because he could be considered versatile. Brooks converted from corner to safety at Florida State. If the Bears do draft him he’d be more of a center field safety, in that he’s much better in coverage than he is coming up to stop the run.

Also, while he can cover, and could be valuable down the seams against slot receivers and tight ends, he’s not the perfect choice there, either. He doesn’t have great hands, which I can live with as long as he defends the pass, but he also doesn’t have great size. I’m not sure how he’d match up with tight ends.

All that being said, he could prove to be a productive NFL player, even if he’ll never be spectacular.

Ahmad Dixon, Baylor – I do believe Dixon will be available when the Bears select, I just don’t know that I’d take him that early. I like him, as he plays with an edge — and will occasionally cross the line to be honest — and he is a hitter. I love safeties that like to destroy everything around them, and at 6’0, 205, Ahmad certainly has the size to do so. He’s also versatile in that he spent some time in the nickel at Baylor.

Where the problems begin is that I feel Dixon is much better as a run stopper than he is as a coverage safety. The Bears could certainly use help stopping the run, but when you’re in a division that features Aaron Rodgers in Green Bay, Calvin Johnson in Detroit (not to mention newly-drafted Eric Ebron) and Teddy Bridgewater in Minnesota, I wonder if a coverage safety should be what they’re looking for.

Ed Reynolds, Stanford – I don’t think Ed Reynolds will go this soon, but he’s just one of “My Guys.” I love the kid. He has good size at 6’2 and 206 pounds, but that size doesn’t slow him down. He ran a 4.56 at the combine, but it’s his speed on the field that matters, and he seldom looks slow out there. He’s big enough to come up and help stop the run, but he can also cover slot receivers and tight ends when he needs to.

Oh, and he’s a ballhawk.

He had seven interceptions in his last two seasons at Stanford and returned three of them for a touchdown. Six of those picks came in 2012, but that had a lot to do with teams doing their best to avoid him in 2013. Picking off six passes will do that. If the Bears did take Reynolds in the second round I wouldn’t complain, but I do wonder if he’ll still be there in the third.

Brock Vereen, Minnesota – Vereen is a player I’ve seen a lot of during his college career, and he strikes me as somebody that Phil Emery would like. He’s a good athlete. While he doesn’t have ideal size, he’s quick and agile and has the ability to make up for mistakes because of it. Though he doesn’t really make a lot of mistakes, and I’ve seen him take some very good angles in coverage and in run support.

But he’s just not very big, and he needs to improve his footwork, and he can be a bit slow to close on a receiver in coverage. Should he improve upon it — and a lot of his faults are certainly fixable with coaching — Vereen strikes me as, you guessed it, a guy who could provide versatility by moving down to cover slot receivers in the nickel package.

The Bears did not get Aaron Donald, but the good news is there wasn’t a huge run on the defensive tackle position in the first round, and there should be plenty of solid options available in the second round. Because of that, I believe that’s the position the Bears will address in the second round, or at least that they should. But it does depend on who is available.

Ra’Shede Hageman, Minnesota – Another player I’ve seen a lot of, Hageman is an athletic freak. I’m somewhat surprised he didn’t go last night, but he’s the athlete that Emery would like. My concerns are that while he certainly showed flashes at Minnesota, he also disappeared at times.

I do wonder how he’ll adjust to NFL guards and centers on a regular basis, and whether he’ll be able to overcome them often enough. Also, while he can use his strength to get into the backfield, his nose for the ball isn’t great, and he doesn’t go side-to-side as well as you’d expect somebody with his athletic ability to do.

Louis Nix, Notre Dame – Nix holds a special place in my heart for the Notre Dame connection, and for his Twitter account, but I don’t think he’ll still be around when the Bears pick tonight.

Even if he is, I’m still not sure he’d be a good fit for the Bears. He’s more of a 3-4 nose tackle than a 4-3 DT, as he’s a run-plugger. He does move extremely well for a guy his size, though, so it’s possible the Bears would consider him.

Timmy Jernigan, Florida State – Early on in the draft process, before everyone discovered Aaron Donald, Jernigan was a guy projected to the Bears in the first round. I preferred Donald, but I have nothing against Jernigan. He uses his hands extremely well, and can get side-to-side exceptionally well for a man his size.

The problem with Jernigan is his first step. It’s slooooow.

He’s very slow off the ball, and in the NFL that can kill you because NFL offensive lineman are much better at their jobs than the Wake Forest linemen are. I don’t know if it’s fixable, but even with that problem, if Jernigan is still there for the Bears, I’d have a hard time passing him up. He’d be a fantastic pick at that spot, and could prove to be a key cog in your defense for years to come. Even if he is named Timmy.

DaQuan Jones, Penn State – Jones is huge at 6’4 and 332 pounds, but he’s also versatile, and he’s a load for an offensive line to handle. There were plenty of times at Penn State where I saw teams having to dedicate two linemen to Jones at all times, and that wasn’t always enough.

Of course, being strong isn’t always enough in the NFL, and I’m not completely sold on his instincts or ability to get down the line of scrimmage to make a tackle. Though in a one-gap scheme, he could be very effective. So he’s a possibility.

Will Sutton, Arizona State — I love Will Sutton. I’ve always loved Will Sutton. His stock dropped a bit this year as his 2013 season did not live up to his 2012 production (23.5 tackles for loss, 12.5 sacks), but it’s hard to do that when teams gameplan around you. Sutton rarely saw anything less than a double team in 2013, but he still finished with 13.5 tackles for loss, four sacks and even an interception.

He doesn’t have ideal size — like Aaron Donald — but he’s just so quick off the ball — like Aaron Donald — and can be a disrupter on the NFL level. What does concern me about him, though, is he has short arms, but his “lack” of height actually helps counter that as he usually gets good leverage anyway. Needs to work on conditioning too, as he does get tired from time to time. Still, all that said, he’s somebody I really like, though I wonder if you could wait on him.

Kyle Van Noy, BYU – Full disclosure, I’ve had a football man-crush on Van Noy for years now. He’s not the most physical linebacker out there, but his instincts are outstanding, and he just has a knack for being where the ball is before the ball gets there.

Never before have I seen a linebacker dominate an entire game the way I saw Van Noy dominate the 2012 Poinsettia Bowl against San Diego State. He scored two touchdowns that night, one on a strip and recovery in the end zone, and another on an interception return. But those were only the highlights, as he ruled that entire game and destroyed anything the Aztecs tried to do.

Oh, and unlike another newly-minted OLB on the Bears, Van Noy already knows how to shed blocks. So while he’s not the greatest form tackler I’ve ever seen, he can actually step up in run support and make the stop.

Carl Bradford, Arizona State – Bradford is the kind of linebacker that Emery could fall in love with. Why? You know why. Because while he was at Arizona State Bradford spent time playing OLB, ILB and DE.

He’s also pretty good, and like Van Noy, he has very good instincts, even if he isn’t quite the playmaker that Van Noy has proven to be. My concern with Bradford is that while I think he could work as a pass-rusher, I have serious doubts about his ability in the run game. So it’s entirely possible he could just be another Shea McClellin.