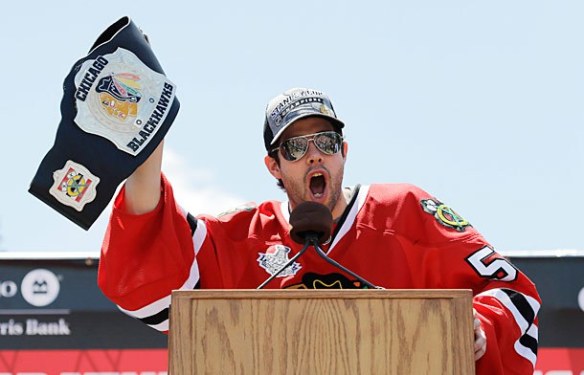 Now we know how he really won that belt

The Blackhawks season may be coming to an end tonight. If it does there will be plenty of Blackhawks fans that blame Corey Crawford for the collapse. They’ll do this because it’s much easier to blame the goalie instead of looking up the stats that show Patrick Kane, Marian Hossa and Patrick Sharp have combined for one goal and two assists in the first four games of the series.

But be forewarned, Lazy Blame Layer, Corey Crawford will assault you with water.

From a TMZ report because that’s the only place a story like this would originate:

TMZ Sports spoke with Wong who says he was sitting behind the Blackhawks bench — and was heckling Crawford — when the goalie was pulled from the game toward the end of the 3rd period.

That’s when Crawford — who’s in the middle of a 6-year, $36 MILLION contract — allegedly whipped out a water bottle and blasted him right in the face.

Wong says he believes the bottle was filled with backwash — along with water — and it has caused serious irritation to his eyes. Wong says he’s going to a doctor to get his eyes checked.

League sources tell TMZ Sports … Wong was ejected from the game 3 to 5 minutes after the spraying incident for “taunting the players” and it was while he was being escorted out of the arena that he began to rub his eyes, complaining about the pain.

AH, THE PAIN! THERE’S WATER IN MY EYES!! AAAAAAAAHHHHH!

Now, if there’s proof that Corey Crawford sprayed a fan with water, I’m sure he’s going to be fined by the NHL. The NHL isn’t exactly big on players spraying fans with water, or anything, really.

But filing a battery report because you got sprayed with water? I hope this actually goes to court so a judge rules that Crawford is legally allowed to beat the man with his stick for five minutes just so he learns what battery actually is.

Sadly, that’s not likely to happen as the Los Angeles police say they aren’t investigating Crawford. Which just means that there is no deterrent to keep him from spraying you next.

Watch yourselves out there.