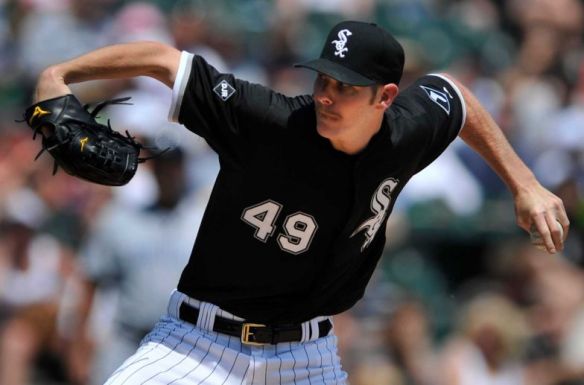 The MLB Amateur Draft will begin on Thursday night, and since I pay little to no attention to high school and college baseball, I’m not going to bother trying to break down possible picks for either the Cubs or Sox. Instead I’ll look at history to give us an idea of the future. So, much like I did with the Bears a few weeks ago, I’m going to rank the first round draft picks of both our franchises over the last 20 years. We’ll start with the White Sox.

The thing about the MLB draft is that it’s so damn hard to project what a baseball player is going to be after getting drafted. It’s not like other sports where, while busts occur, more often than not you’re getting a useful player in the first round. In baseball you’re basically guessing.

What I did was I took the first round draft picks by the White Sox in the last 20 years (including sandwich picks) and ranked them based on their career WAR, playing time, and just my own personal feelings (though WAR is the baseline).

We’ll get rid of the players that haven’t/never made it to the bigs. Since the 1994 draft the White Sox have made 35 first round draft selections. Of those 35, 14 have never appeared in the Majors, though five of those 14 (Tim Anderson, Courtney Hawkins, Keon Barnum, Keenyn Walker and Jared Mitchell) do still have a chance to, as they’ve all been drafted in the last five years. Still, the last first round draft pick of the White Sox to actually appear in Chicago was Chris Sale, and he was taken in 2010.

So it’s been a while.

Where does Sale rank amongst the 21 draft picks that have reached the Majors? Well, I’m sure you have a pretty good idea.

Clemons appeared in five games with the Sox in 1997, and started two of them. In his two starts he lasted 6.2 innings and allowed nine runs while walking eight and giving up 13 hits. For some reason he was never heard from again.

This is the first time I’ve thought of Aaron Myette, like, ever. He totally escaped my consciousness of having existed, and that’s because he pitched 18.1 innings for the White Sox before being traded to the Rangers for Royce Clayton in 2000. The White Sox kind of won that trade, if anybody could feel good about it, anyway.

Biddle only spent five seasons in the bigs, with his first three in Chicago. He was actually worth only -0.2 WAR with the Sox before falling off a cliff in Montreal. His biggest contribution to the White Sox was that he was included in the package that brought Bartolo Colon to the south side in 2003.

You know who else was in that trade that brought Bartolo Colon to Chicago? Why it was Jeff Liefer! So two of the White Sox’ worst draft picks helped bring back a useful player. Liefer showed some promise in 2001 when he hit 18 homers in 83 games (and he only had 39 RBI somehow) but he would only hit 13 more home runs in his six other seasons. He retired after 2005.

Ring appeared in 99 games in MLB, though none were as a starter, and none were with the White Sox. He was traded to the Mets for Roberto Alomar in 2003.

Remember that week or two last year when we were all convinced that Josh Phegley was going to be the new Johnny Bench? Yeah, well, he may get another shot to prove himself in the future, but I don’t think it’ll be this year.

This one hurt me a bit, because Josh Fields was actually a player I had expectations for. Sure, I’d never seen him play baseball in college, but I had seen him play football! Yeah, well, Josh never could make much contact, striking out in 30.2% of his plate appearances with the Sox while hitting .229.

I will always remember Joe Borchard because he hit one of the longest home runs in the history of US Cellular Field, and I was sitting in left field watching it fly over my head. I’ll also always remember him because he was the guy the Sox traded to Seattle for Matt Thornton following the 2005 season (that’s right, Borchard played seven games for the World Series champs). I’m sensing a trend here.

Replacement level!! Ginter never did much as an arm out of the pen for the Sox, but he did start 14 games for the Mets in 2005 after the Sox traded him for the one and only Timo Perez. God bless, Timo.

I had high hopes for this one. Maybe I was just high on the 2005 season that was underway at the time, but I had done some studying after this pick and people said good things. Those good things never really happened, though, as Broadway only pitched 40.1 innings with the Sox, starting two games before being dealt to Mets for Ramon Castro during the 2009 season.

I was told that Brian Anderson was going to be the next Mickey Mantle for the most part. Hawk Harrelson assured us all that he was going to make us forget about Aaron Rowand and any other White Sox ever. Instead Anderson just made us want to forget Anderson, though he was a very good defensive centerfielder, I’ll give him that. He was then traded to Boston for Mark Kotsay before the 2009 trade deadline before eventually trying to catch on with the Royals as a pitcher.

Poreda was another Sox pitcher I had high hopes for while reading scouting reports on him in the minors. When he went to the Padres as part of the package for Jake Peavy in that 2009 deadline blockbuster, I feared he’d be the one player the Sox truly regretted parting ways with. Nope. Sox won that trade. He signed as a free agent with the Rangers over the winter and is currently toiling with Round Rock in the Pacific Coast League.

Johnson played quite a few games on the south side from 1998 to 2002, but never quite lived up to the hype from Hawk Harrelson. So now we have two themes for Sox first round picks: they either get traded for better players, or Hawk tells you how awesome they are before they suck. Sometimes both.

So we’ve reached the portion of these rankings where players proved to actually be decent. Jim Parque was never amazing, but at least he ate up some innings for a few years. His best season was in 2000 when he went 13-6 with a 4.28 ERA. Now, the ERA doesn’t seem like much, but remember the era that 2000 was right in the middle of. He was actually worth 2.9 WAR that season, and had an ERA+ of 117. Then things fell apart.

Bobby Seay was drafted out of high school by the White Sox, but never actually signed with the team. Instead he ended up in Tampa Bay and went on to have a pretty decent career with the Rays, Rockies and Tigers as a lefty out of the pen.

Think about how disappointing Gordon Beckham’s career has been. Now compare that to every other first round pick on this list. Gordon’s starting to look a bit better, huh? While he may never live up to the promise he showed during the second half of 2009, Beckham has proven to be a quality Major Leaguer. You hope for more with a top-ten pick, but you can’t really complain about it.

I had a tough time putting Kip ahead of Bacon, but Kip’s career longevity is what decided it. Still, Gordo could easily pass him on this list in a few more seasons. Now, Kip was never spectacular for the White Sox, but he did manage to spend 12 years in the bigs and earn just under $18 million. Not too shabby.

The player so nice the Sox traded him twice. He’s never appeared in a Sox uniform, but he did help bring Jim Thome and Nick Swisher to Chicago in those trades. One of them worked out. While it’s hard to complain about Jim Thome, I’d gladly give up the season of Swisher to have kept Gio.

I bet you were expecting Chris to be ranked first, weren’t you? Well, I won’t be surprised if he’s there one day, but as awesome as he is, he hasn’t had the complete career that the guy ahead of him had.

Every White Sox fan loved Aaron Rowand, and with good reason. He wasn’t a great player, but he was a good player, and he was one of the few success stories the Sox had with hitters in the draft. Ever since the Sox traded Rowand to the Phillies for Jim Thome they’ve been searching for Aaron Rowand to patrol center. Adam Eaton is the latest to get a shot. If he has half the career Rowand did, he should be proud.