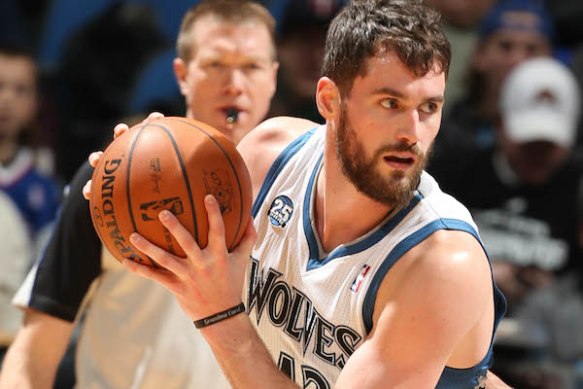 If you were wondering if the Bulls would have serious interest in trading for Kevin Love this summer, it seems we already have an answer. According to Jackie McMullan of ESPN Boston, the Bulls are not only interested in going after Love, but they’ve made an offer.

MacMullan was writing about a trade possibility with the Boston Celtics, but she says the Timberwolves are already fielding better offers than what the Celtics can give. Including one from the Bulls.

The Timberwolves privately maintain they already have fielded better offers from other teams, among them the Chicago Bulls, who can offer draft picks and some combination of Jimmy Butler and Taj Gibson along with Carlos Boozer, whose bloated $16.8 million contract expires next summer and represents the kind of cap space rebuilding teams crave.

If you are Kevin Love and can choose to join a team with top dogs Derrick Rose and Joakim Noah or Rondo and Jeff Green, which way are you leaning?

And that’s not going to happen any time soon, as Adrian Wojnarowski reported Wednesday that the Wolves aren’t going to do anything with Love until they hire a new coach. Exactly which coach is out there that Minnesota can hire that would suddenly convince Kevin Love that Minnesota is the best place for him I am not sure, but I certainly understand the logic.

As a Bulls fan the only thing we should really take from this report is that, if true, the Bulls definitely plan on going after Love this summer. At the moment, that’s enough for me.

2 thoughts on “Report: The Bulls Have Already Made An Offer For Kevin Love”