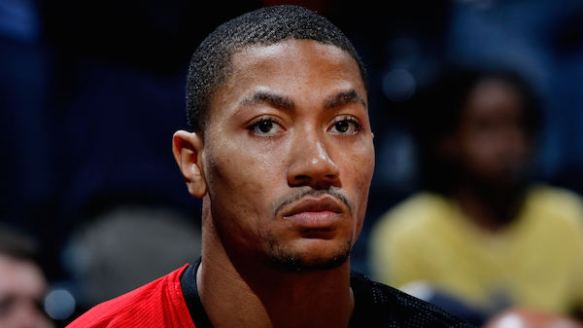 In his luxurious condo at Trump Tower Derrick Rose sits in a t-shirt and shorts staring at the cell phone on the coffee table. He stands up and paces about the room for a bit, convinced that the phone is watching him to see what he does next.

“Should I pick it up?” Rose asks himself, unsure of what to do.

The phone, it just sits there. It’s just a phone, but it represents so much more. Picking up that phone and dialing that number is a call for help. It’s admitting that you’re not good enough to get the job done yourself.

Rose steps outside onto the patio to get some fresh air, the warm, humid Chicago breeze blowing in his face as he looks over the Chicago River and out at Lake Michigan. Rose doesn’t smoke, but he suddenly wants to. He’s tense. He’s stressed out. He knows what he wants to do, but he doesn’t know what he should do.

He heads back inside, the phone is still there on the table. Mocking him. Taunting him. Rose ponders throwing the phone off the balcony and to the water below, but he realizes that’d be silly. It’s just a phone. It doesn’t think or believe anything.

“It’s just a phone,” he mutters to himself. “I’m a man. I control the phone, I control my own destiny.”

Rose picks up the phone and dials that number.

Finally there’s a voice on the other end of the line.

Rose freezes up, he doesn’t know what to say. The silence lingers in the air like a stale fart.

Suddenly Derrick realizes that he has an ultimate goal in mind, and sometimes you have to make sacrifices to achieve that goal, even if it goes against what you want to do. The words finally make their way from his brain to his lips, pouring out of him like a spigot.

“I’d like a large pizza with sausage, pepperoni and extra cheese, please.”

“All right, sir, we can definitely do that. We’ll just need a phone number and address.”

Rose gives the voice on the other end of the line his number and address.

“I understand, sir. I’m sure our pizza will more than fill you up.”

Rose hangs up the phone and sits down on the couch, a weight lifted off his chest. His brother walks in the room shaking his head.

“You’re supposed to be on a diet, D. Pizza ain’t part of the diet.”