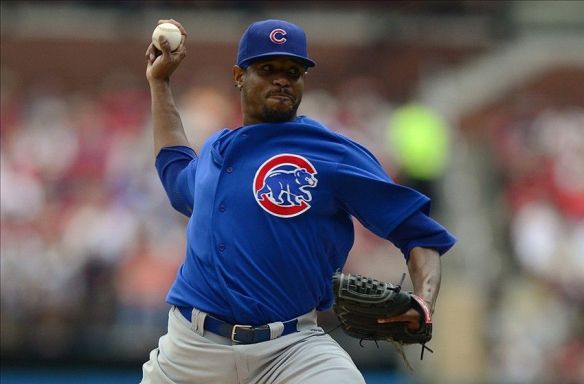 As a fan it’s incredibly easy to want your favorite baseball team to trade somebody. It’s even easier when that player is getting paid $11 million this year and is owed another $22 million over the next two seasons while putting up a 5.61 ERA (though his FIP is only 4.27!) in 20 starts.

Nobody wants to trade for him.

The Cubs are trying to trade struggling starter Edwin Jackson, who’s slipped badly this year and needs a change of scenery, at least.

Even the Yankees, an occasional pursuer of Jackson in the past, don’t seem interested. So this might be a tough task.

Damn MLB.tv and the MLB Extra Innings package allowing other teams to watch Edwin Jackson actually pitch. If not for modern technology the Cubs might find somebody stupid enough to take him!

Realistically if the Cubs want any chance to find a taker for Jackson then they’re going to have to eat a huge chunk of the money he’s still owed, and I honestly don’t know that such a thing would be worth it for them. While the Cubs should actually be a halfway decent team next year, they’re not going to be in a position to win anything, so you might as well continue paying Jackson to eat innings for you rather than somebody else.

Then, maybe next summer, when there’s not as much money left on his deal — and maybe after he’s improved enough to be somewhat respectable — the Cubs will find somebody willing to take him on.

But it won’t be this season. Not unless Arizona is still allowing Kevin Towers to answer the phone, anyway.