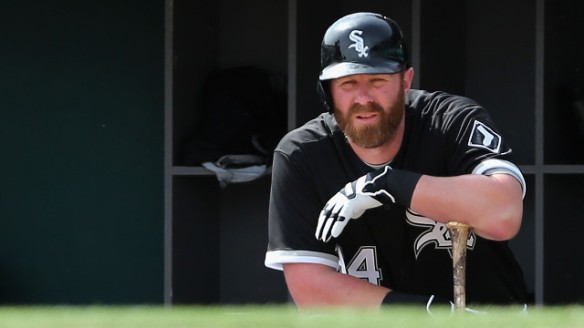 There is still the waiver deadline, in which teams can pass players through waivers, and if they go unclaimed, teams are then free to try and negotiate a trade. While I don’t expect any major changes to the Sox roster over the next month, I do think there’s a relatively decent chance that Adam Dunn could find a new home.

And those chances may have increased Thursday night.

That’s a significant loss for the Royals. While Hosmer hasn’t lived up to the promise he showed when he first reached Kansas City, he’s still one of the key cogs on a Royals team that’s currently four games behind the Tigers in the AL Central, and 3.5 games out of a wild card spot. Considering how long its been since Kansas City has been in the playoffs — it won the World Series in 1985 and hasn’t played a playoff game since — I was somewhat surprised that the Royals didn’t make a move before the deadline.

But maybe Adam Dunn is an option for them now.

Dunn has never quite lived up to expectations in Chicago, but the truth is he’s having a pretty decent season at the moment. If you were to put Dunn on the Royals right now he’d lead the team in home runs (17), OBP (.362) and OPS (.812).  Hell, in reality he’s been better than Hosmer this season, it’s just he’s been better with a much higher price tag.

It’s enough to make you wonder if the Royals would consider bringing Dunn over as a stop gap, since it’s entirely possible that Hosmer could miss the rest of the season if his hand doesn’t heal as quickly as expected.

Now, the idea of having Billy Butler and Adam Dunn platooning at first base doesn’t exactly inspire a lot of defensive confidence, but it’s not as if Hosmer has been a Gold Glover over there. At the moment Hosmer’s dWAR at first is -0.1. Dunn’s not good, and there’s a reason he’s only played 21 games at first this season, but his dWAR is -1.2. So it’s a drop off, but not a huge drop off.

I don’t think Adam Dunn’s presence launches the Royals into the playoffs or anything, but he’s certainly an option that’s better than anything else they have currently. The only real stumbling block I can see is Dunn’s salary (as of now he’s still owed about $5 million of the $15 million he’s making this season), because I’m not sure the Royals will want to pick that up. He’s a free agent at the end of the season, so the Royals don’t have to commit to any more than that, but they’re the Royals and they’re not exactly known for breaking the bank.

But with the first playoff appearance in 30 years within their sight, maybe they’d make an exception. Once Rick Hahn puts Dunn through waivers, should he go unclaimed (and I’d imagine he would), Dayton Moore and the Royals should be one of the first calls he makes.